Juggalo: Insane Clown Posse and the World They Made 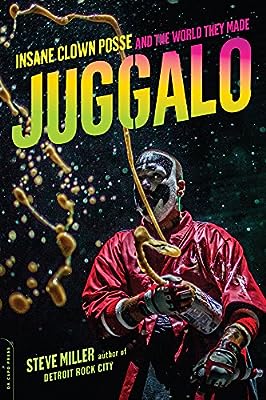 Juggalo: Insane Clown Posse and the World They Made is a vivid journey into the heart of a misunderstood subculture. Through firsthand reporting, including interviews with Violent J and Shaggy 2 Dope of the Insane Clown Posse, their friends and family, and numerous devoted fans, Juggalo explores the lives of the proud outsiders who are frequently labeled as a threat or dismissed as a joke.

Author and journalist Steve Miller follows ICP across America, hanging out with Juggalos before and after shows, at the legendary annual Gathering of the Juggalos, and at work and home to share their stories. In addition, Juggalo dives deep into the FBI's misguided assault on Juggalo culture and the misidentification of this devoted group of horrorcore fans as a gang.

Juggalo is also the chronicle of two hard-luck kids from Detroit who created an empire and became the unwitting stars of a uniquely American grassroots success story. Without the help of radio airplay and with little love from the music industry establishment, ICP went platinum and fostered one of America's most durable subcultures.

Juggalo is required reading for the hardcore fan and pop culture buff alike, a scrupulously researched account of a subculture unlike any other—one that so shook the establishment it launched a federal investigation—as well as a window into the world of the Juggalos and the singular mythology of their underworld apocalypse.

Buy it Now
See more Juggalo: Insane Clown Posse and the World They Made on eBay

Rihanna Only Girl in the World White T-s...